With the release of Windows 2008, the backup mechanism of Windows has also changed. No more NTBackup, but Windows backup, available to your 2008 system as a feature. Also part of that feature is the systemstate backup, you know the one that is utterly Important to restore Domain Controllers. Now the GUI will not let you perform a single systemstate backup (only full backups including everything) and backups can be stored on a network share. But let’s say we want a systemstate backup only?! 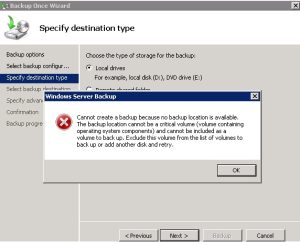 The wbadmin command will let you perform a systemstate only backup. However, if you perform that systemstate backup, you MUST choose a local drive for storing the backup, where as you do a normal file backup you can choose a network path. No problem one would say, most Administrators split their partitions so they are left with multiple drives. For example, C: for Windows, D: for NTDS and E: for Sysvol. However if you try to run a backup and store it on C, D or E including systemstate your backup will NOT be performed since the backup target also contains the backup source.

A smart admin would guess that he can map a shared folder to a local drive and try to backup to that target, since the target is now a “local” drive and does not include the backup sources, in this example I’m trying to backup FDC01.forestroot.local to FDC02.forestroot.localD$

But no luck at all, the Windows backup can only backup directly to a share, not a mounted driveletter.. so we say.. okay! now we can backup our systemstate to the networkdrive by using UNC paths:

You can use another new feature in Windows 2008 called Shrink Volume.. go to the Storage Manager select the drive with the most space on it (and where you where originally planned the systemstate backups) and select Shrink Volume

Windows will automatically detect the maximum shrink size based on files etc on the drive a defrag could help getting more space available.. now split the volume create a new volume and use that for the systemstate target..

Another option could be to allow the system to backup to locations that are also used as the source, however this means that the backups are stored on the critical volumes. Make sure to monitor the free space on the drive on regular basis. To allow the system to do this we need to edit the AllowSSBToAnyVolume registry setting..

! Note that a lot of backup software will issue the wbadmin command to get the systemstate backup prior to copying that to tape/other location!