Ever since playing with BGP I was looking for a way to make redundant tunnels. As the local internet provider here would only allow me a single IP address, I looked at the other side. What if we have two Azure regions that have a VPN tunnel to my SRX and between each other. Routing would be dealt with by BGP and thus, I should be able to connect to both VNET’s through each of the VPN tunnels.

In order to make it a bit more challenging, I threw in the new VNET Peering option too.

While the technical details are below in this post, lets discuss the architecture in general.

The advantage of this solution is that the VPN reliance is less now, while I only have a single SRX on-premises, enterprise customers will have multiple devices connected to different ISP lines which can then VPN into the Azure VNET’s. The second advantage is that we can now create a highly-available architecture which runs cross region. When another network is added on (or behind) the yellow box on the right, it can be filled with other services/VM’s.

So how to set it up?

We will use the parts we learned in this blogpost.

As you can see, on the top we have our Juniper SRX with ASN65050 and then on the left we have the westUS gateway (GW-201) and the VNET201. With peering in the westUS region I also made a new VNET VNET200.

In order to build this, follow the following setup:

I’m not going to go through the setup of the VNET’s but I have the following configurations:

Next is the VNET2VNET connection that connects the two gateways together and enable the BGP protocol over this connection. During the command of the actual connection you need to add the gateway objects, so there are 3 commands to be executed:

This takes care of the Gateway configurations.

Next is the VNET peering. While it is possible to do this via PowerShell, it is a lot easier to do via the portal. Go to the VNET properties of VNET200 and select PEERING. You can add a new peering and select the VNET201 network as the target.

When doing the peering, there are three options that can be selected:

o   Allows traffic to the VNET outside of the target VNET address space.

In our demo setup, we need to enable this to allow network traffic from on-premises as well as the VNET224 to reach the VNET200

o   Only applicable for networks that have a gateway deployed. Allows peered networks to use the local gateway for connections

o   Tells the VNET to use the remote gateway for connections, effectively extending the network with all the VPN’s configured on that gateway.

Note: you must first deploy the gateways completely, then deploy the network peering. 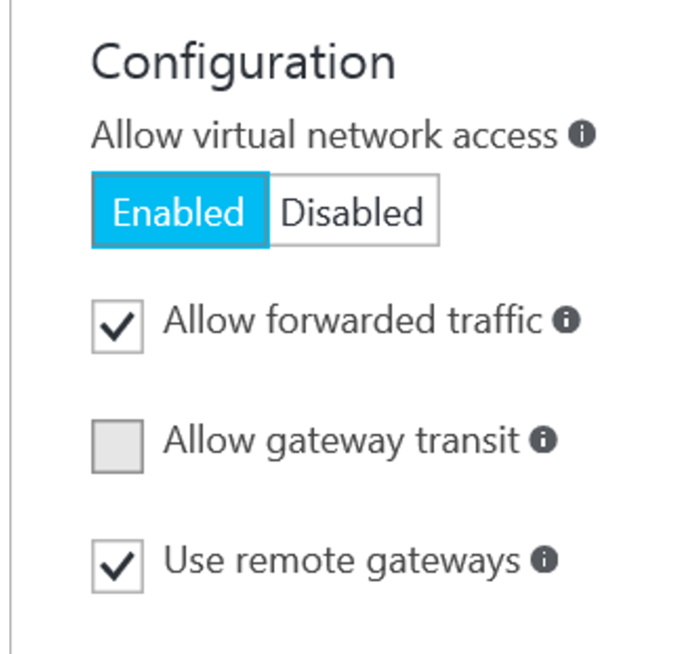 If all is well, the BGP information should not be exchange between Azure and the SRX. This means that for the subnets in Azure you should see two entries for the routing table.

On the SRX the active route will be marked with a *. And the other route is the backup route that can be used.

For the tests I actually changed the destination address for a VPN in the configuration. While having a ping open to each of the three subnets shows that after about 30-50 seconds the BGP protocol rediscovers the correct paths and the failed pings (after breaking the VPN) are restored.

So, this tells us, that while it is an active-passive failover configuration with high-availability, it is not reliable enough to be used for hybrid scenario’s where continuous connections are required. For this, perhaps ExpressRoute is a better option.

So in this article we looked at how to build redundant tunnels towards Azure. The templates in this post can also be used to create multiple VPN tunnels to a single gateway or multiple gateways ensuring that BGP will be implemented for a HA architecture.

For your inspiration, the following architecture shows the next level that can be achieved: